As you guess, my name is Hadi Nur. Currently, I am a professor of chemistry at Universiti Teknologi Malaysia (UTM). The most important thing in my life is to be the right person and have a positive impact on the lives of others.

“The best of people are those that bring the most benefit to the rest of mankind.” 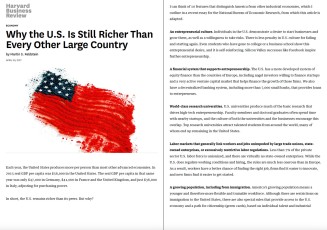 Why the U.S. Is Still Richer Than Every Other Large Country

In short, the U.S. remains richer than its peers. But why?

I can think of 10 features that distinguish America from other industrial economies, which I outline in a recent essay for the National Bureau of Economic Research, from which this article is adapted.

An entrepreneurial culture. Individuals in the U.S. demonstrate a desire to start businesses and grow them, as well as a willingness to take risks. There is less penalty in U.S. culture for failing and starting again. Even students who have gone to college or a business school show this entrepreneurial desire, and it is self-reinforcing: Silicon Valley successes like Facebook inspire further entrepreneurship.

A financial system that supports entrepreneurship. The U.S. has a more developed system of equity finance than the countries of Europe, including angel investors willing to finance startups and a very active venture capital market that helps finance the growth of those firms. We also have a decentralized banking system, including more than 7,000 small banks, that provides loans to entrepreneurs.

World-class research universities. U.S. universities produce much of the basic research that drives high-tech entrepreneurship. Faculty members and doctoral graduates often spend time with nearby startups, and the culture of both the universities and the businesses encourage this overlap. Top research universities attract talented students from around the world, many of whom end up remaining in the United States.

Labor markets that generally link workers and jobs unimpeded by large trade unions, state-owned enterprises, or excessively restrictive labor regulations. Less than 7% of the private sector U.S. labor force is unionized, and there are virtually no state-owned enterprises. While the U.S. does regulate working conditions and hiring, the rules are much less onerous than in Europe. As a result, workers have a better chance of finding the right job, firms find it easier to innovate, and new firms find it easier to get started.

A growing population, including from immigration. America’s growing population means a younger and therefore more flexible and trainable workforce. Although there are restrictions on immigration to the United States, there are also special rules that provide access to the U.S. economy and a path for citizenship (green cards), based on individual talent and industrial sponsorship. A separate “green card lottery” provides a way for eager people to come to the United States. The country’s ability to attract immigrants has been an important reason for its prosperity.

A culture (and a tax system) that encourages hard work and long hours. The average employee in the United States works 1,800 hours per year, substantially more than the 1,500 hours worked in France and the 1,400 hours worked in Germany (though not as much as the 2,200+ in Hong Kong, Singapore, and South Korea). In general, working longer means producing more, which means higher real incomes.

A favorable regulatory environment. Although U.S. regulations are far from perfect, they are less burdensome on businesses than the regulations imposed by European countries and the European Union.

A smaller size of government than in other industrial countries. According to the OECD, outlays of the U.S. government at the federal, state, and local levels totaled 38% of GDP, while the corresponding figure was 44% in Germany, 51% in Italy, and 57% in France. The higher level of government spending in other countries implies not only a higher share of income taken in taxes but also higher transfer payments that reduce incentives to work. It’s no surprise that Americans work a lot; they have extra incentive to do so.

A decentralized political system in which states compete. Competition among states encourages entrepreneurship and work, and states compete for businesses and for individual residents with their legal rules and tax regimes. Some states have no income taxes and have labor laws that limit unionization. States provide high-quality universities with low tuition for in-state students. They compete in their legal liability rules, too. The legal systems attract both new entrepreneurs and large corporations. The United States is perhaps unique among high-income nations in its degree of political decentralization.

Will America maintain these advantages? In his 1942 book, Socialism, Capitalism, and Democracy, Joseph Schumpeter warned that capitalism would decline and fail because the political and intellectual environment needed for capitalism to flourish would be undermined by the success of capitalism and by the critique of intellectuals. He argued that popularly elected social democratic parties would create a welfare state that would restrict entrepreneurship.

If Schumpeter were with us today, he might point to the growth of the social democratic parties in Europe and the resulting expansion of the welfare state as reasons why the industrial countries of Europe have not enjoyed the same robust economic growth that has prevailed in the United States.

—————
Martin S. Feldstein is the George F. Baker Professor of Economics at Harvard University and President Emeritus of the National Bureau of Economic Research.

An ordinary man is living in Johor Bahru, Malaysia, who likes to write anything. Here, the table of content of my blog posts and search what you are looking for here. View all posts by Hadi Nur